CPMBS presented a single Periwinkle Award for individual achievement to James Hinds of Anne Arundel County at the Annual Conference held in Lothian, MD on April 29, 2017. 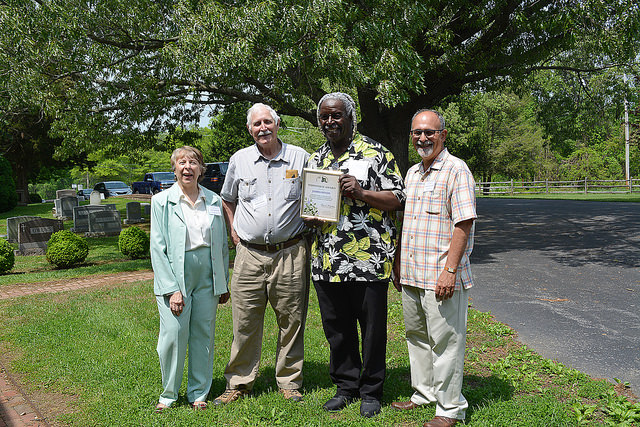 Mount Calvary is a privately-owned, non-church affiliated African-American 16-acre cemetery in northern Anne Arundel County near the Baltimore line with tombstones going back to at least 1906 and an estimated number of burials thought to exceed 9,000. Burials include church founders, social leaders, politicians, and veterans from the Spanish-American War to the Vietnam War. No provision had been set-up for perpetual care and burials also included families who could not afford to pay and burials from Crownsville State Hospital.

Mr. James Hinds has been working almost single-handedly to bring this cemetery up to speed since his relative’s illness. When he arrived two years ago people calling the cemetery were not able to reach anyone and not able to leave messages, bills were not being sent to lot owners, taxes had not been paid for many years, and the cemetery was heavily overgrown with vine-covered trees and bushes.

Some of Mr. Hinds accomplishments within this short period include:

b. Creating an ability to leave phone messages

c. Giving out his own cellphone number to callers and visitors

e. Working with the Office of Cemetery Oversight to assure that their requirements are being met

g. Working with members of the Anne Arundel Genealogical Society to verify the accuracy of a previously published book of cemetery inscriptions

a. Working with an accountant to clear up former tax issues

b. Initiating a requirement for back fees to be paid in full before new burials are permitted

b. He is using dirt from new graves to fill in depressions and having some dirt brought in from the outside as well

c. He is doing some leveling and resetting of tombstone bases and monuments

a. Working with local police to deter vandalism and dumping

b. Working with land developers to ensure that the cemetery borders are respected

c. Supervising the work of others

• Volunteer work by the forestry service

He has managed to turn the cemetery into a more easily maintained commercial setting, has been getting numerous compliments for the cemetery’s current condition, and is working to establish future grant funding and upgrades to the cemetery.