For their outstanding effort to preserve historic cemeteries, three people have received the Periwinkle Award from the Coalition to Protect Maryland Burial Sites, Inc., Maryland’s only non-profit organization dedicated to preserving and protecting the state’s old family and public cemeteries, historic churchyards, and Indian burial grounds.

The awards were presented on April 20, 2002 in Ellicott City, Maryland. 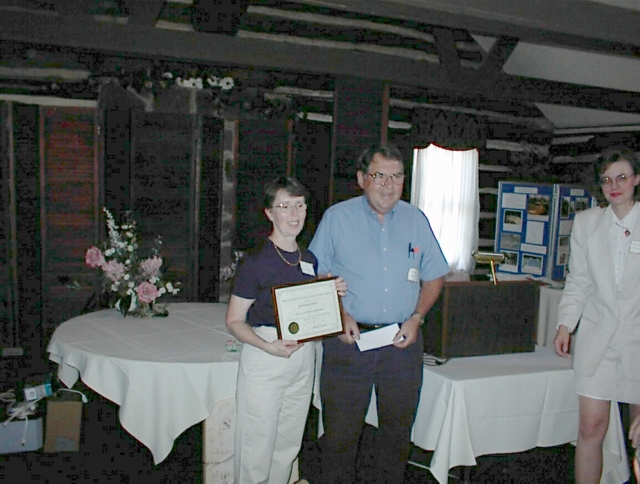 Ann Horvath, a Coalition member for many years, has been caretaker of the Holy Trinity Cemetery in Sykesville since 1998. She coordinates the Spring Cleanup day and makes sure that the grass and weeds are kept under control during the growing season. Ann also checks for storm, wind, and ice damage as necessary.

During the Carroll County negotiations with the nearby encroaching Princess Shopping Center she represented the Episcopal Diocese of Maryland. This new shopping center is threatening the access to the cemetery.

She is archivist for Holy Trinity and keeps photos, documents, and newspaper articles, then files them at the Skyesville Gatehouse Museum.

In addition, Ann assists with the copying of gravestone inscriptions as part of the Carroll County Genealogical Society Cemetery Committee. She is also assisting with the restoration of the Michael Haines Cemetery, a family burial site near New Windsor.

George Horvath assists with maintenance of Holy Trinity Cemetery and did research to clarify the right-of-way encroachment issues of Princess Shopping Center. He has done research over the years concerning other cemetery issues in which the Coalition was involved. Most recently he helped with the King Family Cemetery in Howard County, a case which had a successful conclusion where the county agreed to move a proposed road in order to keep the cemetery intact. He also found a family cemetery on Maryland State property near Sykesville.

Most recently he has worked with local citizens in Granite, Baltimore County, in an attempt to save an old historic cemetery on a large estate slated for development.

George has found evidence in Carroll County land records of several other family cemeteries and gives this information to Carroll County Genealogical Society.

The Coalition is also extremely grateful to him for serving as our treasurer in an excellent manner for several years. 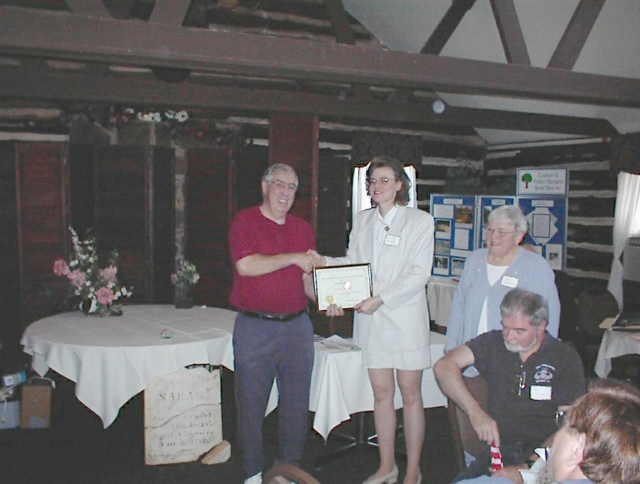 Warden Lloyd L. Waters, of the Maryland Correctional Institution in Hagerstown, rediscovered a long forgotten and abandoned inmate cemetery. The cemetery was on the outer perimeter of the prison grounds. It was overgrown with weeds, briars, and dense vegetation. He was able to identify two numbered headstones partially covered by vines.

Warden Walters researched and found information about the twenty-three inmates. They had died between 1942 and 1949 and had been buried in the cemetery because no next of kin could be found. He also found that twenty-two of the inmates had died of tuberculosis.

Next Warden Waters approached and gained support from an inmate branch of the Jaycees to raise funds for restoration of the headstones and the erection of a bronze plaque listing the names of the inmates and their dates of death.

Now the well-maintained cemetery sits serenely on a small knoll behind the Institute’s building with its white numbered headstones shaded by large, black walnut trees.

The Correctional Institute was established in the early 1900’s on 880 acres of land surrounded by mountains. Its 185 inmates built the original buildings in 1931. The stone used for its construction and that of several farm buildings and homes was quarried and cut by the inmates on the Institute’s grounds. During this time the inmates were housed in barrack-type buildings. Today there are 7000 inmates housed in three separate prisons on the grounds.

This cemetery was featured in the Washington Post, October 2, 2001.