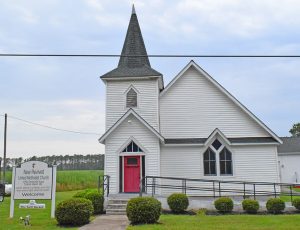 TAYLORS ISLAND — Volunteers from around the region joined congregants of New Revived United Methodist Church on June 19 to restore its adjoining cemetery. The buzz of chainsaws blended the rumbling of a small excavator, as crews cut and removed timber, stumps and debris that had fallen on the resting places.

The effort was led by Eddie Dean, who operates the Lower Shore Cemetery Preservation Organization, a group that has been active in finding some of the more obscure — sometimes simply hidden — grave sites in the Dorchester, and giving them the care Mr. Dean and his associates believe they deserve.

Asked why the strenuous and time-consuming work is done, Mr. Dean paused for a moment before saying, “How couldn’t you?”

The group’s social media site describes its work, saying, “The focus of this organization is the conservation and preservation of historic cemeteries on the Lower Eastern Shore of Maryland. Advocacy through outreach promoting education in restoration and documentation of these sacred burial grounds.”

That sense of mission has taken Mr. Dean throughout the region. Sometimes, it leads to graveyards like New Revived UMC’s, which are in relatively good shape, and at other times, to spots that are nearly invisible to the eye or almost lost in the records.

The cemeteries, with the few words and dates on the headstones, hold not only the remains of ancestors, but information on their lives and situations. Some are the simplest markers, made by pouring concrete into frames and tracing a name into the wet material.

Others share clues on the work done by the deceased, such as that of one of the Opher brothers in Hargis. His stone shows that he was a veteran of the Second World War, who served in the 3515 Quartermaster Truck Company.

A fallen tree or overgrown grass could hide the record of a serviceman’s time in the army, and eventually cause his contribution to be forgotten.

The National Trust for Historic Preservation has named the Morningstar Tabernacle No. 88 Order of Moses Cemetery and Hall site in Cabin John, Maryland one of America’s 11 Most Endangered Historic Places of 2021.

“Saving the Morningstar Moses Cemetery and Hall site is how we make good on promises to expand our infrastructure in an equitable way without further destruction of communities of color. Past disregard for the heritage of the community of Gibson Grove in transportation projects has already resulted in the loss of an important part of our full American story. This endangered listing challenges us to do the right thing today as we expand our infrastructure, so there will be no additional wrong to correct in the future, and it also calls attention to the threats facing African American cemeteries across the country.”
– Katherine Malone-France, Chief Preservation Officer, National Trust for Historic Preservation 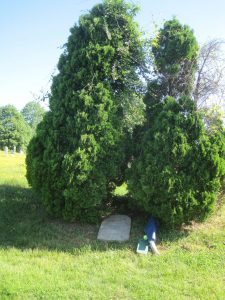 John Maynard, born a free Black man in Annapolis in 1810, died at the age of 64, a wealthy property owner in the city.

After he was buried in St. Anne’s Cemetery decades ago, the exact location of Maynard’s headstone in the city graveyard was mostly forgotten. It became one of the hundreds of markers filling the hilly plot in the shadow of the majority-Black Old Fourth Ward.

But thanks to the sharp eye of Annapolis historian Janice Hayes-Williams and with the help of cemetery maps provided by Ginger Deluca, co-chair of St. Anne’s Cemetery Committee, the worn gray headstone was rediscovered this week nestled between two bushes, covered in dirt, branches and grass clippings.

A clean break at its base indicates it broke off its foundation at some point and was perhaps placed under the bushes for safekeeping, said Mark LaBuda, St. Anne’s manager. Other broken headstones are often propped up against the cemetery walls.

Now, Hayes-Williams hopes to find a place to display Maynard’s headstone permanently to teach future generations about the city’s Black history. A logical spot, she said, would be in the backyard of the historic Maynard-Burgess House on Duke of Gloucester Street that Maynard owned from 1847 until his death in 1875.

Just between Saltpeter Creek and Dundee Creek on the eastern side of Baltimore County, Marshy Point Nature Center attracts bountiful wildlife to its Upper Chesapeake wetlands.

On any given visit a guest might encounter frogs and toads in its vernal pools, seasonal ponds that dry up in the summer, or see majestic eagles soaring across the creek. Kids love checking out the chickens, owls and vulture near the nature center.

But the sights aren’t limited to wildlife.

Just past a dry-docked boat in the parking lot sits a gray tombstone from more than 200 years ago. Few of the visitors to Marshy Point Nature Center even realize it’s there, much less stop to read its inscription:
“In Memory of CASSANDOR HAMILTON Who Departed this Life October 1 1794 Aged 42 Years.”

by Anne Brockett, February 2021
As discussed in the last Courier, local designation as a historic site is a powerful means of protecting cemeteries in Maryland. Historic designation by a city or county government provides protection from inappropriate changes to keep the historic character of cemeteries intact.

While local designation often affords the strongest level of physical protection, cemeteries can also receive protection and recognition by inclusion in the one or more of the following:
• Maryland Inventory of Historic Properties
• National Register of Historic Places
• National Historic Landmark listing