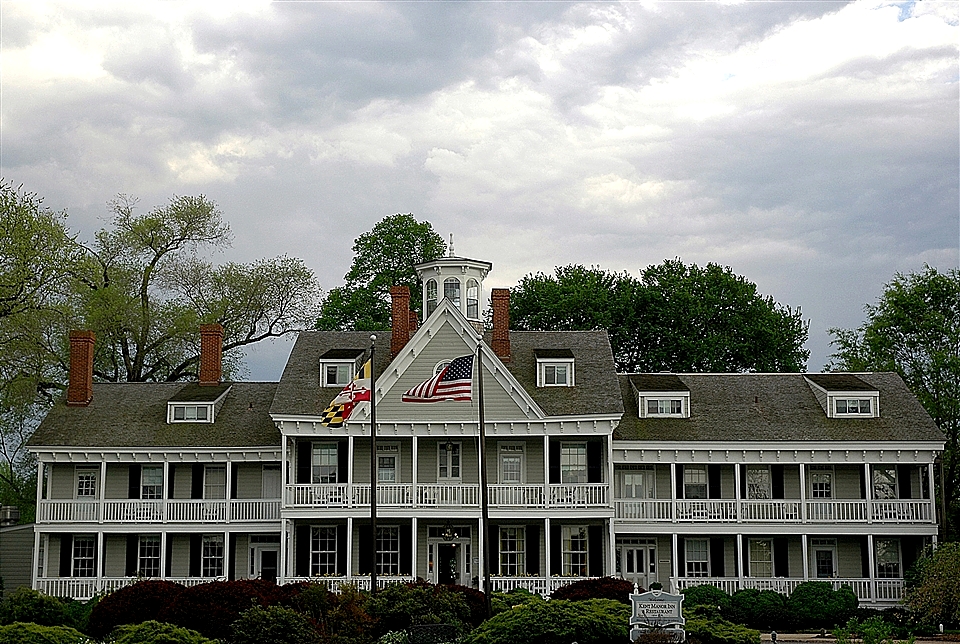 On Saturday, April 17, 2010, the Kent Manor Inn on Kent Island in Queen Anne’s County was the place to be. The Inn was the setting for the 19th Annual Meeting of the Coalition. There were a total of 38 people in attendance.

KMI provided morning refreshments of pastries and coffee, tea, and juice. The silent auction table opened early in the morning with many items, donated by the members, available for bidding. Frances Becker graciously manned the gift shop while Amanda Becker made sure everything else for the meeting ran smoothly. After the attendees registered they found a gift bag waiting for them at their seats, along with a coffin shaped tin of mints, the program, and a packet of information regarding the cemetery tours for later in the day.

The gift bag was the brainchild of Amanda Becker. She came up with the central theme for the bags and determined what items should be included. Amanda found individuals and organizations willing to donate money and items for the bags. Then she purchased and collected all the items. On the outside of the bag Amanda attached three “mourning” cards. The cards were definitely a collaborative undertaking. Lora Lake found the information for the cards in which she and Kerry Lake printed. Lora Lake and Amanda Becker decorated the printed cards using ribbons, black backgrounds, and cemetery-themed inked stamps. One card contained the recipe for funeral cakes that our speaker Linda Collier discussed, one card contained the epitaph for Colin Ferguson whose gravestone can be found in the Shrewsbury churchyard in Kent County, and the last card contained the story of the wife of Rev. Daniel Maynadier. The inside of the bag contained a mirror that can be used to highlight hard to read gravestone inscriptions, a knee pad to use when inscribing or photographing gravestones, a tape measure to accurately obtain he measurements of the gravestones, a sample of Old Bay Seasoning, note pads, pens, pocket calendars, and other handouts.

At 9 a.m. President Melvin Mason opened the meeting. He welcomed all who made the trip to Kent Island and gave his report. His message can be found at President’s Message 2010. Gary Kraske gave the Treasurer’s report. The minutes of the previous Board Meeting were approved. Various committee chairs discussed the activities of their committee. The elections were next on the agenda. The penultimate draft of the new preservation book was presented by the Outreach Committee and a copy was circulated. President Melvin Mason and Vice President Jeff Nesmeyer were elected to a new two-year term. Kristin Kraske was elected to 1-year term as Treasurer. The very important Secretary’s position is open, so anyone interested in holding this position should contact President Melvin Mason. Candy Warden and James Lanier were elected to a new two-year term as Directors. Thomas Mason, Paul Miller, Sandra Wright, Brenda McNeal, and Robert Mosko will begin their second year of their two-year term as Directors. 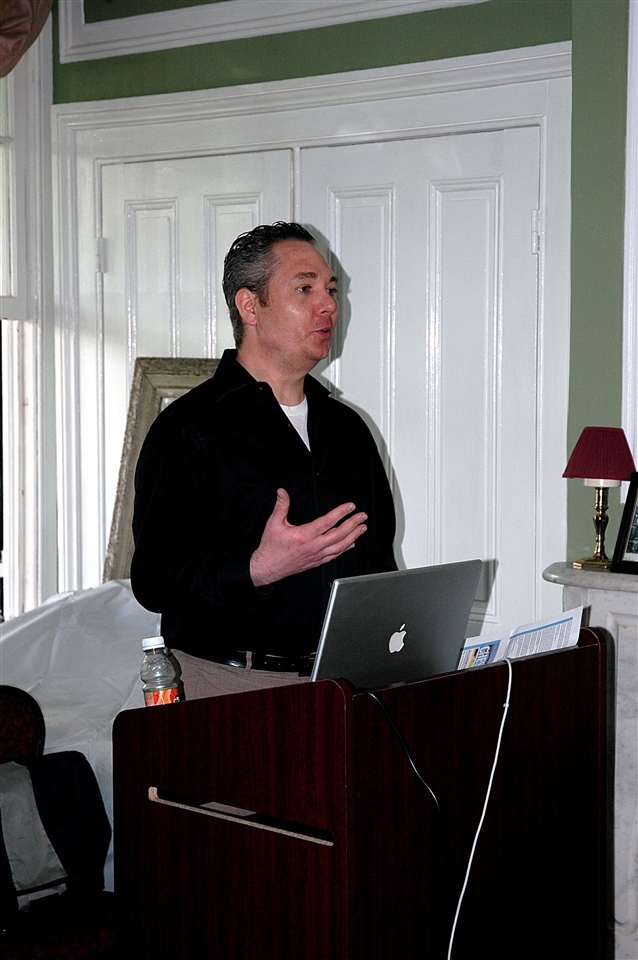 Our first speaker was Timothy Greenleaf. Mr. Greenleaf is employed by National Geographic and his article “The Cutting Edge” appeared in the September/October 2003 issue of Chesapeake Life Magazine. Mr. Greenleaf’s program included the photographs of the cemeteries that he took for his article and other cemetery photographs that he has taken over the years. 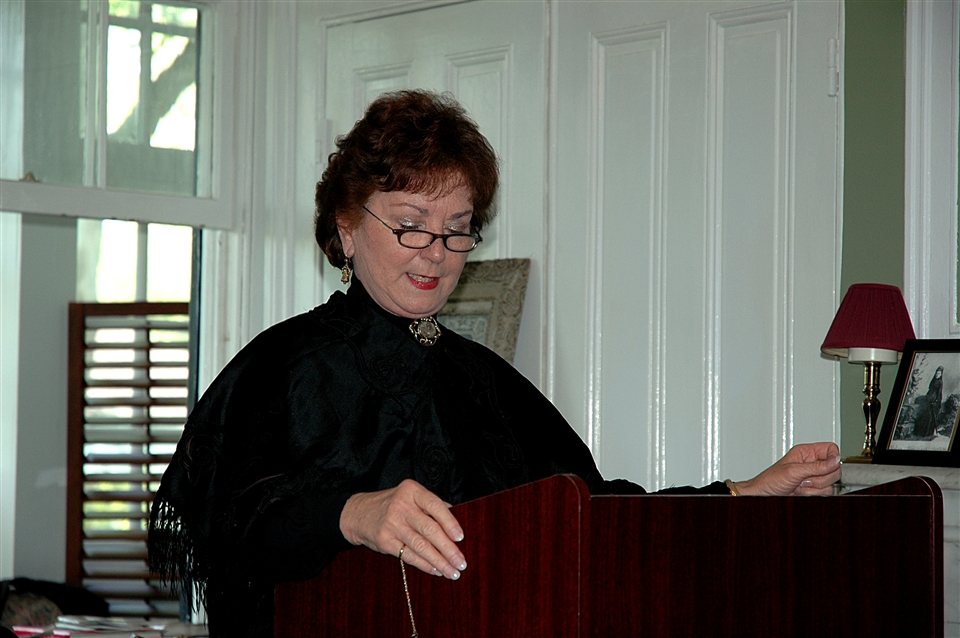 Our second speaker of the day was Linda Collier, a native of Queen Anne’s County. Ms. Collier’s program was entitled “Sentiment and Sorrow, Mourning Practices in the Late 19th Century.” She dressed the part of a woman in mourning as she explained to the group how people, mainly women, behaved and appeared during the period of mourning. She discussed the customs, activities, and items associated with someone in mourning. She provided the group with an extensive handout that included the customs, the symbols of mourning, and mourning superstitions. One superstition I remember as a child, “Absolutely do not step on a grave.” Do you remember that one? Thank goodness I stopped worrying about stepping on graves because when I want to get a good picture I can’t avoid standing in front of the marker.

In addition to the very interesting program Ms. Collier brought along her extensive collection of mourning items. As she spoke of the various customs, clothing, and adornments she select an item from her collection to show the audience.

Following lunch, Amanda Becker announced the recipients of the Periwinkle Awards for 2010. Amanda and Melvin Mason presented the award to the Rosa Bonheur Society which preserves the Rosa Bonheur Memorial Park in Elkridge, Maryland. Candy Warden, James Lanier, and David Simpson accepted the award on behalf of the Society. The second award was presented to Scott Lawrence and St. Mary’s County Genealogical Society for their work and efforts at the St. Nicholas Cemetery on board Patuxent River Naval Air Station, St. Mary’s County. Additional information regarding their work can be found on the Periwinkle page. Each recipient spoke about their project.

Several members stepped forward to make announcements including Edward Taylor, Jr. of the Cumberland Historic Cemetery Association and Ann Brockett. Lora Lake spoke a few minutes about the two cemeteries the group would be visiting in the afternoon.

At approximately 2 p.m. the gift shop closed and the silent auction ended. Both endeavors were a success.

At the conclusion of the meeting the members drove to Broad Creek Cemetery and then onto Stevensville Cemetery. Lora Lake was available at both cemeteries to answer questions and to guide the participants to noteworthy burials.

The Board has declared the Annual Meeting a success. There was a good turnout considering many members had to drive, early in the morning, to Kent Island to attend the meeting. Our treasurer reported that there was a profit this year, which is no small act considering the expenses involved to hold an event of this caliber. Amanda worked tirelessly to find sponsors for the event and she succeeded in keeping the costs down and still putting together a memorable event. Bravo Amanda!