Moses Morningstar Cemetery, with graves dating to the 1890s, was separated from its church when the Beltway was built.

Maryland highway officials committed to avoid a historical African American cemetery when adding toll lanes to the Capital Beltway after 27 “probable” or “possible” unmarked graves were detected along the highway this summer, a state archaeologist said Thursday.

The potential for graves atop a grassy embankment along the Beltway’s Inner Loop prompted state officials to shift the project’s “limits of disturbance” to spare the area, said Julie M. Schablitsky, chief archaeologist for the Maryland Department of Transportation. The sites are on the highway side of a chain-link fence between the Beltway and Moses Morningstar Cemetery in Cabin John.

“We don’t know with 100 percent certainty that’s what they are,” Schablitsky said. “But the patterns give enough indication that it’s probably a cemetery area, and we need to avoid it.”

Ground-penetrating radar also revealed an additional 189 probable burials and 188 possible graves, most of them unmarked, within the cemetery’s boundaries, according to an archaeological consultant’s report. That was about 300 more than local historians and descendants had previously chronicled dating to the early 1890s.

The outer edges of the construction site will be about five feet from the closest area where radar found a possible burial, a project spokesman said. Previous plans had showed the Beltway expanding into the grassy area and about one-fifth of the 1.5-acre cemetery.

Statement in Response to Report of Geophysical Survey for Morningstar Tabernacle No. 88 Moses Hall and Cemetery Released by MDOT SHA with I-495 and I-270 Section 106 Materials on September 8, 2021

Friends of Moses Hall (FMH) is pleased with MDOT SHA’s commitment to help identify the natural boundaries of the cemetery in contracting Dr. Timothy Horsley to conduct a geophysical survey of portions of the cemetery and the existing state right-of-way.

FMH appreciates the thoroughness of Dr. Horsley’s investigations and findings. The report and supporting materials shared with FMH will be helpful in the future stewardship of this historic burial ground. The report findings also led to MDOT SHA’s recently announced decision not to extend the managed lanes footprint into either the cemetery/hall site or the adjacent State right-of-way.

While our report review is ongoing, we do have initial concerns. 1) The cemetery boundary remains incompletely established with respect to the proposed Limits of Disturbance. 2) Additional non-invasive archaeological investigations are needed to determine whether additional graves are located to the north of the Moses Hall foundations, including the portions of the adjacent State right-of-way that were not surveyed. 3) While FMH notes that MDOT SHA has stated a commitment to avoid “ground impacts,” physical avoidance of this historic site does not equate to evasion of all impacts, such as noise and visual impacts, nor does it address environmental justice concerns.

The number of potential burials in the portions of the cemetery surveyed was stunning news. Dr. Horsley’s report “indicated the location of 189 probable burials, and suggest a further 188 possible burials, the majority of which are seen to be arranged in rows. This total of 377 is likely lower than the actual total number of graves present.” Additionally, the report revealed “some 14 probable unmarked burials” and “as many as 34 burials are suggested in total” in the MDOT SHA right-of-way to the north of the cemetery property. The findings suggest substantially more graves than previous historical research and surface inspection had indicated. This raises questions about the full extent of burials. The findings also elevate the possibility that the cemetery is much older than previously thought.

MDOT SHA has demonstrated its ability to engage with the stakeholder community, contract subject matter experts, and address impacts to this historic African American site, and we look to its continued commitment to build upon this success. FMH will continue to review the report materials and will submit formal comments before the end of the 30-day Section 106 comment period. 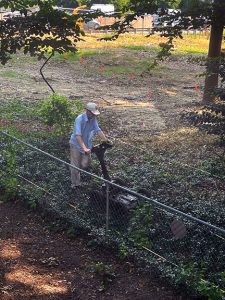 Tim Horsley, Ph.D. is a geophysical archaeologist with more than 15 years experience working on commercial and research projects in North America, South America, Europe and Central and East Asia. He has a Ph.D. in Archaeological Prospection from the Department of Archaeological Sciences, University of Bradford, UK and has taught courses in the UK, US and Peru. His research primarily focuses on developing appropriate geophysical methodologies in challenging environments, including igneous geologies (e.g. Iceland, US), alluvial deposits (US, China) and developed sites (US). He also works closely with archaeologists to effectively integrate geophysical and traditional strategies. Not only does this allow entire sites and landscapes to be efficiently investigated, it is possible to generate and test new research questions that are specific to a site and its particular cultural resources.
Professor Horsley also runs Horsley Archaeological Prospection, LLC, providing geophysical surveys, training and consultancy to the public and private sectors. Projects include prehistoric and historic site delineation, surveys as part of Phase and II investigations and locating unmarked burials in cemeteries.