skip to Main Content
Menu
Promoting the preservation and protection of the burial sites, cemeteries, and grave yards in Maryland

Promoting the preservation and protection of the burial sites, cemeteries, and grave yards in Maryland.

The Coalition to Protect Maryland Burial Sites (CPMBS) is a state-wide nonprofit organization of volunteers dedicated to protecting and preserving historic Maryland cemeteries that have too often been neglected, not maintained, unprotected, and the victims of expediency and exploitation by persons seeking a short-term economic or personal goal. The Coalition recognizes that many burial sites are established through a purchased right of burial that is protected by the laws of Maryland, with such right passing on to the relatives of the deceased, and which right cannot lawfully be abridged by others at will. These beliefs led individuals in the summer of 1991 to form a group that would address concerns not covered by existing laws and organizations. Our members appreciate the importance of burial sites as hallowed grounds, irreplaceable cultural resources, and sources of valuable genealogical data often found nowhere else. Membership in the Coalition is open to Marylanders and others who care about their heritage and their ancestors. Learn more by reading About Us.

The Coalition is grateful for financial assistance from Preservation Maryland and the Maryland Historical Trust to enable this website.

Until about a century ago, some of the land where Frederick Health Hospital stands today — along West Seventh Street in downtown Frederick — served as the final resting place of more than 900 people of color.

Greenmount Cemetery, established in the late 1800s, was once one of three graveyards where people of color could be buried in Frederick. But in 1920, the grounds were sold to what is now known as Frederick Health Hospital.

A few years later, hundreds of graves were moved to Fairview Cemetery, a graveyard purchased in 1923 by a committee of local African Americans, according to previous reporting from The Frederick News-Post.

FREDERICK, Md. — An attempt in Maryland to recognize a patriot who fought the British in the War of 1812 has ignited a modern debate about race and military recognition.

The unmarked grave in question is in the St. John’s Cemetery in Frederick. The Veterans Administration (VA) is denying a formal request for a marker to honor Samuel Neale, who was likely enslaved while serving as a fully armed soldier in the defenses of Washington and Baltimore against British attacks in 1814.

According to a letter from the VA to Lou Giles of the Society of the War of 1812 in Maryland, the request for a marker acknowledging Neale was denied.

“Neale did not have qualifying military service,” the letter states.

Giles says he is dismayed by the response. He provided documentation, including an affidavit from Neale published in Maryland in the 1870s documenting his service. Neale was “on the ground fully armed” outside Washington and Baltimore during British attacks, according to the published account.

He was the aide to a Maryland Militia surgeon who owned him, the records say. Neale was  “equipped as a soldier” on the battlefield to “care for the wounded,” according to the historic statement. He even suffered an accidental gunshot wound when the doctor’s pistol discharged while Neale was unsaddling a horse in Baltimore.

Read more...
The Maryland Historical Trust and Maryland Commission on African American History and Culture recently submitted their report on historic African American cemeteries to the Maryland General Assembly. Developed with the Coalition to Protect Maryland Burial Sites, Preservation Maryland, and descendant communities, and based on feedback gathered from the public, this report documents the state of African American cemetery preservation in Maryland and makes recommendations to help safeguard these irreplaceable sites for the future.
https://africanamerican.maryland.gov/wp-content/uploads/sites/3/2022/07/2022-Historic-African-American-Cemeteries-JCR-Report_small.pdf
To learn more about the project, visit: https://bit.ly/3ECnmmV
Read more... 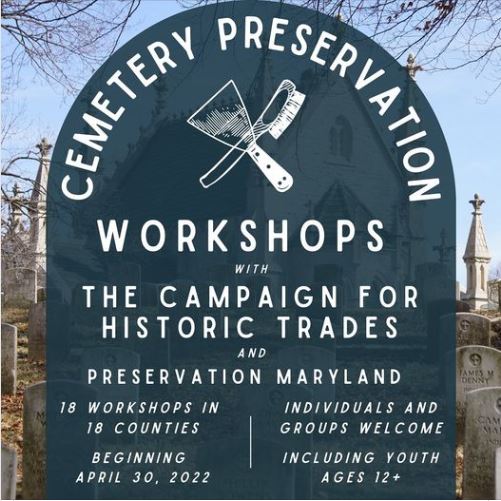 Tasks taught during the workshops may include cleaning the site, maintaining landscaping, and cleaning markers. Preservation Maryland is currently planning 18 workshops within the next year and will host one workshop in each of the following counties: Allegany, Calvert, Caroline, Carroll, Cecil, Charles, Dorchester, Frederick, Garrett, Harford, Kent, Queen Anne’s, Somerset, St. Mary’s, Talbot, Washington, Wicomico, and Worcester.

We hope to connect with locals in each county who would be interested in learning more about the preservation process and how to care for Maryland’s history. We especially hope to connect with youth ages 12 and older to help build the next generation of preservationists and historians who can help maintain these sites into the future. These workshops will be approximately 3 to 4 hours where participants will be expected to stand or crouch while completing the preservation work in outside weather. 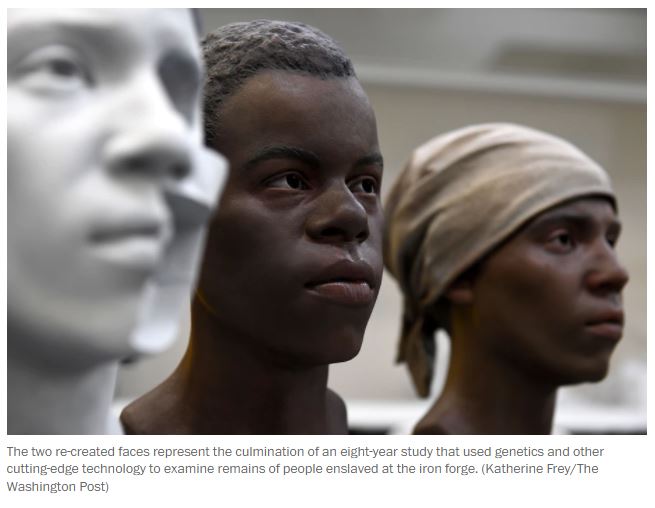 RED HILL, Md. (WDVM) — What used to be a patch of overgrown trees and greenery on the side of the road has now been formally recognized as a historic African American cemetery. People gathered in Red Hill, Maryland outside of Keedysville to honor the people buried in Red Hill Cemetery.

Just two years earlier, the burial ground, which lies right off the side of Red Hill Road, was unrecognizable, overrun by bushes and trees. Raymond Thomas is a descendent of a number of people buried in the cemetery. Knowing that many of his family members were buried in Red Hill Cemetery, Thomas was one of a handful of people who tried to clear debris and keep the area tidy.

On Saturday, the burial ground was formally recognized by the town of Keedysville as well as Washington County. During both dedications, the sun broke through the clouds and shined a little brighter on attendees, especially on Thomas.

“Oh it, it means a lot now that it’s getting recognized and, you know, I finally got some help to take care of it now,” Thomas said. “Because before, it was me and a couple other ones in the family, and you know, come out here two or three times in the summer to try and get it cleaned up and stuff. It was just, you know, hard to do.”

Thomas tried his best to always keep the headstones of his grandparents, Reason and Carrie Thomas, clear. He says before the volunteers cleared out the heavy brush and trees, the two most visible headstones were the only indication of a burial ground.

The African American Historical Association of Western Maryland estimates that there are around 56 people buried in Red Hill Cemetery but are looking to confirm more and even identify dependents of those buried here.

“Our next goal is, we’re going to start to grid out the cemetery and identify the approximately 56 to 58 graves that are here,” Richard Kline, president of the African American Historical Association of Western Maryland, explained. “My goal is within the next year to also get ground-penetrating radar to actually identify the specific sites, and then identify those known burrows that we have.”

The African American Historical Association of Western Maryland hopes to get the red hill cemetery formally recognized by the national register of historic places in the future. Nonetheless, Kline is grateful for the recognition of the burial ground as he believes a lot of recent focus by historians has highlighted the underground railroad. He hopes that by restoring the red hill cemetery, it will highlight the need to find and restore other forgotten cemeteries around the state and the country. 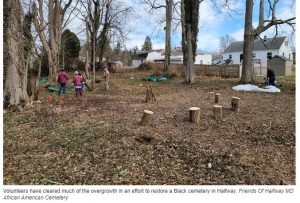 HALFWAY (Washington County, MD) — For decades, the resting place of scores — perhaps hundreds — of Black residents lay overgrown and unnoticed as a residential neighborhood developed around it.

Those interred there include at least a dozen veterans, mostly from the Civil War, and leaders of Hagerstown’s Black community.

Although her specialty is medieval history, Amt started researching local Black history as part of a project involving her church, St. Mark’s Episcopal at Lappans.

“More than a decade ago, I started researching the Black members or the enslaved members of my church,” she said.

She took it on as a volunteer project, she said, even though she’d never researched African American history or slavery.

“And it just drew me in — it was such surprising and compelling information that I uncovered.”

On November 13, 2021 several members of the Coalition (Eileen McGuckian, Tina Simmons, and Dennis Green) met with Christina Bloom to help clean up the Beard-Bachtell cemetery located in Smithburg, Washington County. A dumpster was provided which was filled to the brim with saplings from inside the cemetery. The weather provided as much of a challenge as the cemetery, giving us samples of cold, rain, high winds, and, eventually sun. We were joined in our work by Christina’s brother, Landon Grove and a couple other relatives. Christina’s great-grandfather is buried there and they worked to try to right his headstone while we were there. Although we were able to make great headway in removing small trees and uncovering many of the 40+ headstones, there is still more work to be done. There is still a lot of ground cover, animal burrows to fill in, stones to be re-set, and capstones secured at the top of the stone wall. We look forward to continuing to offer recommendations to the local community in their efforts to care for this cemetery. 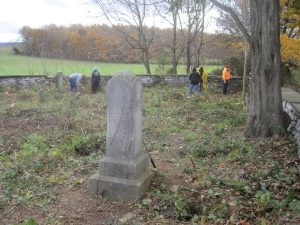 Click to view the current edition of our Courier newsletter. 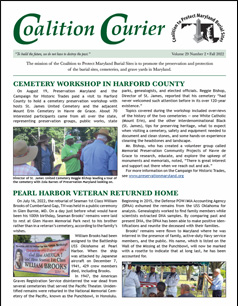 Meetings are open to all members.

The Trader Foundation for Maryland Burial Sites provides financial assistance for worthy projects to rejuvenate endangered historic Maryland cemeteries. The Foundation invites applications for grants up to $2,000 to qualified parties. Application deadlines are January 1 and July 1 of each year.

The project or program must benefit a specific burial ground in Maryland, and Trader funds must be matched by the grantee in cash or in kind. Examples of eligible projects include rescue of an endangered site, gravestone conservation or restoration, documentation, protection of burial site from desecration by nature or by man, cemetery clean-up, and planning for restoration. For further information and the application form, click here.

Apply now...
We couldn’t do it without you.
Please consider making a donation* today:
*Your donation will help the Coalition to continue our good work, but is not tax deductible. Your donation to the Trader Foundation is tax deductible. All donations are greatly appreciated !
MAKE A DONATION
© Coalition to Protect Maryland Burial Sites - All Rights Reserved
Back To Top